Elsa Beskow, born Maartman, was born in Söder in the capital Stockholm. Her family existed of a mother and a father, four sisters and a brother. At an age of 15, her father died, leaving the mother alone with the children. This resulted in a move to the mothers younger un-married aunts and uncle who all lived together. The aunts and uncle later became figures in her stories about Aunt Green, Aunt Brown and Aunt Lavender (and Uncle Blue).

Even as a child she made up long stories which she told to her older brother Hans. During the years 1892-1895 Elsa studied at Tekniska skolan (the Technical School) to become a drawing-master. At the same time she began her drawing for children. Two years after finishing her education, Elsa got married to a priest and painter named Natanael Beskow. They got six sons (Stig, Gunnar, Börje, Bo, Göran and Dag). Later she often used her sons as figures in her stories and fairy tales. The couple got a house in Djursholm, Stockholm. The lushy garden stood as an inspiration for her stories' souled flowers and plants.

Her illustrations and stories were first publicated in 1894, in the children's magazine Jultomten (Santa Claus). The first children book was published in 1897, a picture book named 'Sagan om den lilla lilla gumman' (Tale of the Little Little Old Woman), today a famous classic. Her break through came 1901 with the publishing of 'Puttes äventyr i blåbärsskogen' (Peter in Blueberry Land). Many books has been published. In 1952, at an age of 78, Beskow wrote and illustrated her last book, 'Röda bussen och gröna bilen' (Red bus, green car). One year later she dies, 79 years old.

The illustrations of Elsa Beskow dominated the picture book art for about 50 years, and it is likely that many of today's painters have been influenced of her work of art. She is often called the Beatrix Potter of Scandinavia. The most remarkable of Beskow's literature form is her color pictures to the right and text and black silhouettes to the left. The nature is always very closeby in her stories, where flowers and plants have a face and the forests are full of gnomes, trolls and fairies. Some of her stories are interesting from a cultural-historical way, where we get to be aware of the details from the turn toward the 20th century.

In 1952 she recieved the Nils Holgersson Plaque for all her life's work, and in 1958 a price was named after her, the Elsa Beskow Plaque. The Elsa Beskow Plaque is distributed each year to the artist that has illustrated the best children book of the year before. As a monument, there is a marked named for her link to Djursholm, Elsa Beskows torg. Here is also a small statue in bronze, representing Elsa Beskow. Both Elsa and Natanael are buried at Djursholm Cemetery.


Posted by Traveling Sweden at 6:36 PM No comments:

Fragaria vesca or wild strawberries as they are commonly called, is a species of Fragaria which belongs to the rose family. Wild strawberry grows naturally all over the northern hemisphere.The fruit looks like strawberry, but are much smaller. The taste is like the taste of strawberries but maybe something sweeter. Did you know that our strawberries are cultivated from the wild strawberry?

In sweden wild strawberry is often picked by children and put like beads on a staw to be eaten. Maybe thats the orgin of the name? Straw-berry.


Posted by Traveling Sweden at 4:30 PM No comments:

Born in Jönköping 1882, John Bauer was early admitted to the great art school Konstakademien in the capital Stockholm, by the age of 18. Earlier he had worked hard on two preparing art schools in Stockholm. He and his wife Ester took off to Germany and Italy for study tours, while the majority of art students took their way to Paris. In 1907, he started to illustrate the piece of art work that made him famous, the saga collection 'Bland tomtar och troll' (Among Gnomes and Trolls). Painting the Swedish landscape with its deep forests and mythical creatures, the old Swedish folk beliefs of trolls, wood nymphs and gnomes. Soon, John Bauer was reckon as Sweden's most brilliant saga illustrator. Except this, Bauer also made other art works which has not been as famous.

As Bauer was moving from Bunn in Småland they took the way through the lake Vättern on the 20 of November 1918. The steamer Per Brahe was wrecked during an autumn storm. All crew of 16 and all of 8 passengers died. John Bauer, wife Ester Ellqvist and son Bengt could not be buried until four years later. John Bauer was 36 years old. They are buried on the East Cemetery in his hometown Jönköping. The tragic excident was well written about in the newspapers and made John Bauer even more famous.

Today his hometown of Jönköping has named a path after him, John Bauerleden, which reckon to be the most beautiful path through Husqvarna and Gränna. On this track, you can almost sense the presence of both trolls and princesses.


Posted by Traveling Sweden at 2:46 PM No comments:

"Everything great that ever happened in this world happened first in somebody’s imagination."
- Astrid Lindgren

Astrid Lindgren is known worldwide for her children's books and loved by many. She is considered to have been a much loved character who cared deeply about children. Her books are estimated to have sold more than 145 million copies worldwide. Among her's bibliography are Pippi Longstocking, Emil, The Lionheart Brothers, The Children of Noisy Village and Karlsson on the Roof.

Astrid Lindgren grew up in Näs, near Vimmerby in Småland. Many of her stories is based on her childhood memories from Småland. In Vimmerby you can nowdays find a Astrid Lindgren village featuring many of her character and places in her books. At the Astrid Lindgren Village there is things to explore and interact with for both children and adults.

In 1976 Lindgren wrote a debated article called "Pomperipossa in Monismania" or Pomperipossa in the World Of Money. The article that was a little satiric story criticize the fact that Lindgren had discovered that she payed a 102% margin tax. The story led to a stormy debate about taxes and is belived to have made a little contribute - among other things - to the first loss for the social democrat party in an election for over 40 years.  Altought Astrid Lindgren remain a social democrat for her entire life.

Read more about Astrid Lindgren at http://www.astridlindgren.se/en
Posted by Traveling Sweden at 3:16 PM No comments:

A Dalecarlian horse or Dala horse (Dalahäst) is traditionally a red painted, stylized wooden (Not a real painted one mind you!) horse which is produced mainly in Nusnäs, Mora in Dalarna. Halter and harnesses are usually painted with patterns in white and blue. Nowadays one can find horses that are painted in all sorts of colors as a primer. Not just red.

The painted horse represented Sweden at the World's Fair in New York in 1939, and since then has been a commonly used symbol for the country. A three meter high Dalahorse sent over to New York and close to 1000 kg small Dala horses were sold in the souvenir shop.

If you want to see he world's largest Dala horse, you have to travel to the Alvesta. At a rest area next to Highway 68/70 you will find it. It is 13 meters high and was inaugurated in 1989. A Dala horse is an neat souvenir to take home from a trip to Sweden.
Posted by Traveling Sweden at 5:51 PM No comments:

Gränna and the polkagris candy can 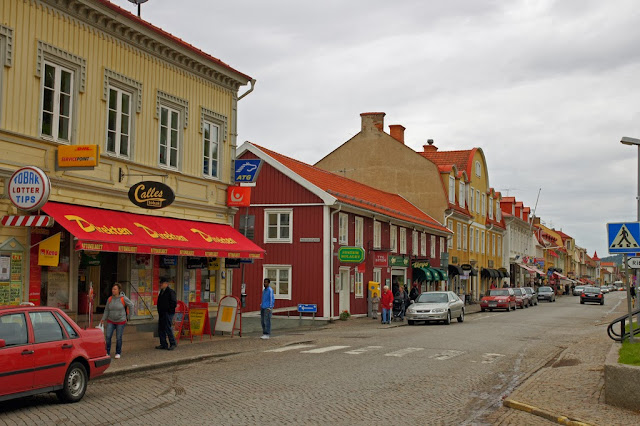 Gränna is a community in the northern part of the municipality of Jönköping, located on the eastern shore of lake Vättern. Gränna is famous for its fruit orchards and its candy cane production. From here there are also ferry services to Visingsö, which altogether makes Gränna a lively frequented tourist town in summer. The buildings in the center of Gränna consists mostly of older wooden buildings, making Gränna to a charming little town. Gränna has a population of around 2,500 inhabitants. 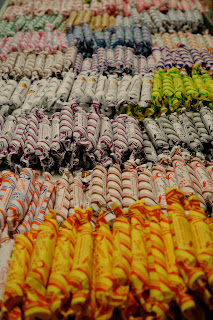 A polkagris candy cane is a type of hard candy consisting of water, sugar (peppermint), glucose and vinegar. It was invented in 1859 in Gränna and still forms a candy tradition in Gränna. The classic version is a cane with mixed red-colored batter. It gives a characteristic red-white-striped look. Candy canes are often associated with Gränna, where thousands of candy canes are produced daily. The Polkagris candy cane comes in several flavors like tutti frutti, strawberry, blueberry and raspberry. The polkagris is made into serveral shapes and forms such as canes, sticks, mallets and other fun shapes.
Posted by Traveling Sweden at 4:24 PM No comments:

Meatballs are small balls of ground meat. Often beef and pork is used. You can use either beef or pork. But most commonly, a mixture of beef and pork is used. Obviously, there are vegetarian options as such as soy or Quorn. The batter usually is mixed up with eggs and milk, bread crumbs, potato flour or oatmeal. They often include onions for taste. Preferably finely chopped. Seasoning can consist of salt, allspice, black and white pepper. The buns are fried in a hot frying pan and turned gradually to get color all around. Greater amount of meatballs can be roasted in a oven roasting pan, which is more comfortable. But then remember to take out and shake the pan frequently.

A traditional Swedish way to serve meatballs are accompanied by potatoes or mashed potatoes, gravy and lingonberry jam. Meatballs can also be served with spaghetti or macaroni.

Below follows a recipe for your own Swedish meatballs.


Mix bread crumbs and cream. Let swell for 10 minutes. Add the minced meat, onion, egg, salt and pepper. Stir until smooth. Shape the mince into regular buns. Fry them in butter or oil over medium heat for 3-5 minutes.
Posted by Traveling Sweden at 3:27 PM No comments: